← All you wanted to know about organic food in the EU
Novel Foods – the final verdict? →

Posted: December 16, 2015 | Author: Karin Verzijden | Filed under: Authors, Food, Food Supplements, Health claims |Comments Off on Weight loss claims – the proof in the pudding is in the eating 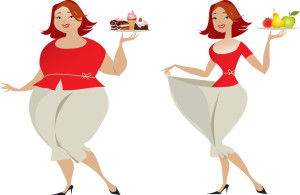 Some food supplements claim to help the consumer to lose weight and achieve the ideal bodyweight by consuming the product. Sounds too good to be true? Then this post is of interest for you. Following a request from the European Commission, the Panel on Dietetic Products, Nutrition and Allergies (NDA Panel) was asked to provide a scientific opinion on the conditions of use for health claims related to meal replacements for weight control. In fact, the NDA Panel previously evaluated the conditions of use for these types of claims in 2010. We take this re-evaluation as an opportunity to report on the legal framework for weight loss claims regarding foodstuffs.

The relevant legal framework is constituted by both the Health Claim Regulation and the Energy Restricted Diets Directive. Article 12 of the Health Claim Regulation prohibits the use of claims making reference to the rate or amount of weight loss. According to article 13 of the Health Claim Regulation however, it is permitted to use health claims describing slimming or weight control or a reduction in the sense of hunger. It is also permitted to use claims describing an increase in the sense of satiety or the reduction of the available energy from the diet. For these claims to be allowed, they should be in line with the requirements of the Energy Restricted Diets Directive (containing both compositional and labeling requirements) and they should be included in the Community list of permitted claims. Furthermore, these claims should be based on generally accepted evidence and they should be well understood by the average consumer.

The consumer could be helped in achieving weight reduction by consuming products that replace some of the daily need for energy or that reduce the craving for more food. In fact, maintaining a healthy metabolism (of either lipids or carbohydrates) could result in weight loss on the long term. There are quite a few authorized claims relating to a normal metabolism. For instance, the claim “Zinc contributes to normal carbohydrate metabolism” can be used if the product to which it relates contains zinc in a quantity of 1,5 mg/100 g or 0,75 ml/100 ml. Furthermore, the claim “Calcium contributes to normal energy-yielding metabolism” is allowed if it relates to a product contains at least 120 mg/100 g calcium or 60 ml/100 ml Calcium. As a final example, the claim “Choline contributes to normal lipid metabolism” can be used if the food product at stake contains at least 82,5 mg of choline per 100 g or 100 ml or per single portion of food.

Until now only one single claim with respect to weight loss has been authorized. The claim reads “Glucomannan in the context of an energy restricted diet contributes to weight loss”. Glucomannan is extracted from a plant called “konjac”, having very diverse nicknames, such as devil’s tongue or snake palm. The claim regarding Glucomannan is targeted at overweight adults and may be used only for food products that contain 1 g of glucomannan per quantified portion. Furthermore, the consumers should be informed that the beneficial effect is obtained with a daily intake of 3 g of glucomannan in three doses of 1 g each, together with 1-2 glasses of water, before meals and in the context of an energy-restricted diet.

Next to the Glucomannan-claim, there are two claims available for foodstuffs replacing one respectively two meals a day. Both claims are identical and read “Meal replacement for weight control”. Where nutrition and health claims in general are linked to particular nutrients, this claim however is not. In order to achieve the claimed effect, one meal respectively two meals should be substituted with meal replacements daily. Furthermore, foodstuffs bearing this claim should comply with specifications laid down in Energy Restricted Diets Directive. This Directive sets minimum and maximum limits for nutritional values of foodstuffs that are consumed as a replacement for one or two meals a day. Furthermore, this Directive prescribes the content of replacement products, in terms of energy, proteins, dietary fiber, vitamins and minerals. The foods under the Energy Restricted Diets Directive are not to be confused with so-called medical foods. These foodstuffs also regulated in terms of content and labeling and they are also used to replace meals, however only upon prescription and not for the purposes of weight loss.

Re-evaluation of the weight loss claim

The reason for the re-evaluation of the claims regarding meal replacements for weight control  is a bit of a technical story. We will try to do our best to explain this in clear and understandable terms. As of 20 July 2016, the Energy Restricted Diets Directive will be repealed by a new Functional Foods Regulation providing a common framework for all types of functional foods: infants foods, medical foods and total diet replacement for weight control. As a consequence, the Annex to the Energy Restricted Diets Directive containing detailed guidance on the composition of foods for energy restricted diets will no longer apply Instead, guidance will have to be taken from the applicable Annex to the Food Information for Consumers Regulation (Annex XIII, Part A to be exact) introducing the Nutrient Reference Values’ for vitamins and minerals. This will cause some changes (increases or decreases) in the micronutrient content of meal replacements to occur.

Task of the NDA Panel

Under both the current and the future legal framework for meal replacements, the foodstuff has to contain specified quantities of certain vitamins and minerals to make sure that even when replacing meals as a whole, the consumer does not suffer a vitamin/mineral deficiency. Normally, the consumer is expected to loose weight on the basis that the replacement meal has a controlled energy content and a relatively high protein/low fat content. The NDA Panel was asked to give its scientific opinion about the substantiation of the health claim related to meal replacements under the new Functional Foods Regulation. The NDA Panel considered that the difference in micronutrient composition required under this new Regulation in respect to the Energy Restricted Diets Directive did not affect the scientific substantiation of said health claim, as previously assessed in 2010. As a consequence, the claim “contributes to weight loss” can still be used, provided of course that the conditions for use are met.

What more is allowed?

With respect to other ingredients and substances than Glucomannan, weight loss or similar claims have been made as well. As examples can be mentioned green tea extract and hyperproteins pasta. EFSA did assess more substances and the related claims and concluded that there was a lack of scientific evidence to substantiate such a claimed effect. Recently the claim; “fat-free yogurt and fermented milks with live yogurt cultures, with added vitamin d, and with no added sugars help to maintain lean body mass (muscle and bone) in the context of an energy-restricted diet” was not approved. In essence, products that carrying the claim, ‘contributes to weight loss’ which do not contain Glucomannan in the prescribed quantities and do not comply with the standards as set in the Energy Restricted Diets Directive, are not allowed on the European market. But with a little education of the consumer, explaining that a normal metabolism is actually at least as important as weight loss, plenty of other claims are available for healthy products. During the festive season, the emphasis may not be on the consumption of healthy products. But on a day-to-day basis, we strive for a healthy intake – or don’t we? That’s the point!

The author is grateful to Floris Kets, intern at Axon Lawyers at the time of drafting this blog.