The era of nudging: EU’s proposals for mandatory front-of-pack labeling

As part of the EU Farm to Fork Strategy for a sustainable food system under the Green Deal, the European Commission agrees that nudging is necessary to guide the consumer to healthier and more sustainable food choices. This has translated into two impact assessments for mandatory front-of-pack (FOP) labeling. Various EU Member States and individual food business operators are however not waiting for harmonized EU FOP labeling and adopted the nutri-score (guiding health choices) and/or eco-score (guiding sustainability choices). This blogpost shows how these initiatives fit into the current and upcoming legal framework.

Nutri-score is a five-color nutrition label demonstrating the overall nutritional value of a food product front-of-pack. It allows consumers to compare various foods in a simple and fast way. The label is based on a scale of 5 color and letters, from a dark green “A” for the most healthy choice to a red “E” for the least healthy choice. Simply put, the algorithm behind nutri-score allocates positive points for favorable dietary components (fruits, vegetables, pulses nuts, fibers and proteins) and negative points for energy and unfavorable dietary components (saturated fatty acids, sugars and sodium). The total positive points are subsequently subtracted from the total negative points. The lower the score, the better the letter/color grade.

The aim of nutri-score is to nudge the consumer into healthier food choices, and to stimulate the food industry to reformulate their recipes. This way, nutri-score should contribute substantially to a reduced burden of nutrition-related non-communicable diseases such as diabetes, cardiovascular diseases and some types of cancer.

From a legal perspective, nutri-score qualifies as voluntary food labeling in accordance with article 36 FIC Regulation. Food business operators that opt for using nutri-score are however obliged to use it for all foods they place on the market to avoid cherry picking. Moreover, a green “A” or “B” score additionally qualifies as a nutrition claim under the Claims Regulation. Since the claim is not listed in the annex to the Regulation, Member States adopting the nutri-score are subject to the notification procedure of article 23 of the Claims Regulation.

In the meantime, the European Commission held a public consultation to introduce standardized mandatory FOP nutrition labeling as part of the revision of the FIC Regulation within the EU’s Farm to Fork strategy. In its impact assessment, it listed five options:

The harmonized FOP nutrition label as listed under 2 – 5 above could be either voluntary or mandatory, which is still subject to debate. The impact assessment also mentions the possibility of having a policy mix rather than using one preferred option. Next to the outcome of the public consultation, the European Commission will take into account the comprehensive review on FOP nutrition labeling schemes by the Joint Research Centre (2020) on EFSA’s recent scientific advise on nutrient profiling. A legislative proposal is expected in Q4 2022. 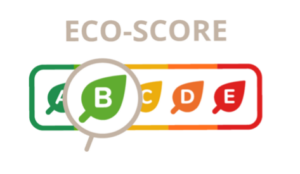 Eco-score can be seen as the equivalent of nutri-score in the field of sustainability. Just like nutri-score, eco-score is a French initiative. It shows the consumer the environmental impact of a food, using the same presentation as nutri-score in terms of colors and letters. The food’s environmental impact is measured in two steps. First, the environmental footprint is calculated using the Product Environmental Footprint (PEF) method, which is based on a Life Cycle Assessment (LCA). The PEF method takes into account 16 different impact categories, such as ozone depletion, land use and climate change. This eventually translates into a score between 0 and 100. Thereafter, bonus points can be added up or minus points can be deduced from this score. These extra points (positive or negative) are based on 4 additional criteria: (1) food production methods as measured through attributed third-party sustainability credentials such as organic certification, fairtrade or MSC, (2) recyclability of the packaging, (3) the provenance of ingredients, and (4) the stay-away from biodiversity-related issues such as overfishing and deforestation. The LCA takes place at product category level; the allocated bonus and minus points are related to the individual product.

There is not yet a legal framework specifically dedicated to environmental claims, let alone a legal definition thereof. Environmental claims are currently enforced based on general rules, guidelines and self-regulation within the legal framework of unfair commercial practices and misleading advertisements, as discussed in our earlier blogpost. Interestingly, these different sources produce different definitions of environmental claims. The definition thereof in the Dutch Code for Environmental Advertising is for example very broad and includes the eco-score as a claim related to the environmental factors connected with the product. It is however questionable whether an eco-score “C”, “D” or “E” would fall under the definition of a ‘green claim’ under the EC Guidance on the Unfair Commercial Practices Directive. This latter guidance namely refers to a positive environmental impact (which products with lower scores have not) or a lower damaging impact on the environment than competing products. Since the eco-score algorithm is largely based on product categories rather than individual products, it is not necessarily suitable for comparisons between competing products such as for example different fruit juices. Assuming that eco-score does qualify as an environmental claim, the following question is whether it is in conformity with the applicable rules. These rules are however not black and white and leave room for interpretation, especially since the number of enforcement cases is still rather low.

The ambiguity illustrated above may be over with in the near future, since the European Commission is working towards the harmonized use of a sustainability label under its Farm to Fork Strategy and the transition towards a sustainable food system. In its impact assessment, it lists the following options:

A legislative proposal is expected in Q4 2023. Until July 21 of this year, it is possible to contribute through the public consultation.

Meanwhile in the Member States….

Member States seem not to be waiting for the legislative proposals of the European Commission. Instead, various Member States launched national initiatives on FOP sustainability labels and join forces to ensure that such labels will be implemented in a similar way throughout the EU. Taking the Netherlands as an example, the Ministry of Agriculture, Nature and Food Quality aims to implement a voluntary sustainability label for foods in the Netherlands by 2025. This goal forms part of the National Climate Agreement. Together with the food sector and other stakeholders, the Ministry is currently investigating how such a label for the Dutch market could look like. LCA’s based on the PEF-method are taken as a starting point for further development.

FOP labeling is a topic of conversation. Various initiatives on both national and European level are taking place simultaneously, in the hope that they will once come together as an EU harmonized label. We see different food businesses reacting to this situation differently. Where some opt for awaiting formal decisions at national level and instructions by the government, others are pioneering and experimenting with FOP labeling within the currently existing legal framework. Examples include the nutri-score pilot by Iglo and the full-fledged use of eco-score by Colruyt Group in Belgium. What about you? Are you a game changer or a laggerd?

Together with Lisa Gray from Iglo and Veerle Poppe from Colruyt Group, Jasmin Buijs presented this topic at the VMT Food Law Event on June 7 last.