Making an environmental claim on a product? Stay away from these 7 sins of greenwashing

Posted: November 15, 2021 | Author: Jasmin Buijs | Filed under: Authors, Food, Information |Comments Off on Making an environmental claim on a product? Stay away from these 7 sins of greenwashing 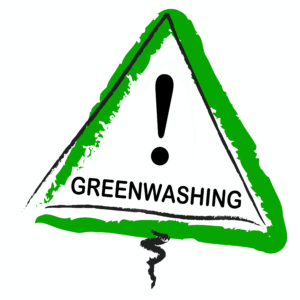 Food packaging materials (and other products) are more and more often advertised as environmentally friendly, compostable, recyclable, or otherwise sustainable. In general, this is a positive development: it helps consumers to make (more) sustainable choices. But there is also a danger lurking, namely greenwashing. Greenwashing occurs when a product (including packaging) is being advertised as more sustainable than it actually is. In such cases, the consumer is not helped by the information conveyed and in fact the opposite is true: the consumer is misled. This blogpost explains what environmental claims are, the applicable legal framework, and, most importantly, how to prevent greenwashing.

Environmental claims, also known as ‘green claims’, are not the same as sustainability claims. Both the Dutch Advertising Code Committee (in Dutch: Reclame Code Commissie, or ‘RCC’) and the Netherlands Authority for Consumers and Markets (in Dutch: Autoriteit Consument & Markt, or ‘ACM’) specified that ‘sustainability claim’ is an umbrella term including claims referring to environmental aspects, animal welfare and/or labor conditions.

The fact that there is no specific legal framework does however not mean that no rules apply to environmental claims. Such claims must namely comply with general rules, guidelines and self-regulation on misleading advertisements. This includes first and foremost the Dutch Unfair Commercial Practices Act (in Dutch: Wet oneerlijke handelspraktijken), which prohibits misleading advertisements and which is supervised by the ACM. What the Dutch Unfair Commercial Practices Act means for environmental claims is explained in the above-mentioned guidelines of the European Commission. Furthermore, the ACM launched the Guidelines Sustainability Claims early this year, which document provides general tools to make clear, correct and relevant sustainability claims (and so environmental claims). With regard to food packaging materials in particular, the EU Framework Regulation on Food Contact Materials states that the labeling, advertising and presentation of a material or article must not mislead the consumer. Last but not least, there are several ISO standards that help meet the legal requirements for environmental claims. For example, ISO 14021:2016 contains requirements for so-called self-declared environmental claims, which are made without independent third-party certification. Based on this ISO standard, the European Commission developed a guideline to help formulating environmental claims and evaluating existing environmental claims.

The 7 sins of greenwashing

Environmental claims, unlike for example health claims for foods, are not part of a closed system with an exhaustive list of claims that can be made. On the one hand, this means that advertisers have more room to make such claims. At the same time, it means that there is more ambiguity about what is and is not allowed. The key question “What may and may not be claimed?” requires an individual assessment. What is clear, however, is that the following seven sins of greenwashing are absolute no-gos.

Describing the product as ‘sustainable’ or ‘environmentally friendly’ on the basis of only a limited number of properties without considering the environmental impact of the total life cycle of the product. For example, if a new production process saves water while it increases the total footprint of the product in question, then a claim on the water saving is not justified.

Making environmental claims without providing easily accessible evidence that supports the claim. If a package is for instance being advertised as ‘CO2 neutral’, inform the consumer where the outcome of the underlying life cycle assessment (LCA) and/or other relevant test reports are explained in a way that is understandable to the consumer (e.g. on your company’s website).

Using terms that are too broad and/or too general to understand the correct meaning thereof. The more general a claim is, the higher the burden of proof is to substantiate the claim. Make environmental claims therefore as specific as possible.

Using designations and symbols that falsely give the impression that the claim has been externally verified. It is therefore preferred to make use of an existing quality mark rather than inventing your own designation or symbol. This also helps the consumer not to get lost in the jungle of quality marks.

Claiming something about the product that is technically true, but which is not important when looking at distinctions in terms of environmental performance. For example, glass is factually speaking BPA-free, but such a claim would be misleading since this substance never occurs in glass.

Claiming to be more sustainable than other products within the same category, while the sustainability of these types of products in general is in question. Consider, for example, an environmental claim on cigarette packaging. This is not done.

Claiming something about the product while it is not (entirely) true. Is the packaging for example recyclable or compostable? Substantiate this claim with a validated test before communicating this to the consumer.

Companies wishing to make environmental claims on food packaging materials (or other products or services) are advised to take into account the following tips. First, put yourself in the shoes of the consumer. Can there be confusion about the environmental benefit being claimed? If so, adjust the claim accordingly. Secondly, be honest. Make sure the environmental claim does not give the impression that the packaging is more sustainable than it actually is. Finally, support your claim with evidence. This could be done by having the packaging material and its environmental impact independently assessed. The results of such assessment should subsequently be expressed on the packaging in a way that the consumer can understand, or, if there is no room for this, on a website. In the latter case, don’t forget to make a reference to that website on the packaging!

A Dutch version of this blogpost has been published at VMT.