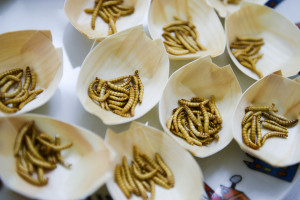 Do bugs have a place on your dinner plate other than the fly that lands on it or the caterpillar that accidently ended up in your dish, as it happened to live in the cauliflower you prepared for dinner? If you live in Europe you are likely to answer this question with ‘no’ and you might even have a slightly disgusted look on your face right now…

FAO and European Commission on insects

In other parts of the world certain insects are part of people’s diet and are sometimes even considered as a delicate and exclusive bite. The call to expand the consumption of edible insects worldwide recently became louder. According to the UN Food and Agricultural Organization (FAO), insects can potentially help solving the increasing demand for animal protein. In 2013 FAO published the report ‘Edible insects’ and in May 2014 the first international conference ‘Insects for food and feed‘ was organized in the Netherlands in collaboration between Wageningen University and FAO. This video provides a summary of the conference. Furthermore, Wageningen University announced the launch of the first scientific journal focussing on this topic in 2015. On 27 November 2013 the Director General for Health and Consumers mentioned edible insects as an interesting alternative source of protein in her speech:

‘Looking to the future, feeding a growing world population will inevitably increase pressure on already limited resources – land, oceans, water and energy. The development of alternative sources of protein will no doubt grow in importance and significance to meet the future protein demand. Such sources include cultured meat, seaweed, beans, fungi and, of course, insects. The greater use of insects is an interesting alternative both for human consumption and animal feed, given the prospect of high protein yields with low environmental impacts.’

During the abovementioned conference it became clear that there was an urgent need to develop legislation on edible insects to give the food and feed industry clear guidance on the requirements they have to meet. This discussion paper provides a look at the regulatory frameworks influencing insects as food and feed at international, regional and national levels. This paper, however, is not exhaustive. The European Commission has asked EFSA to deliver a scientific opinion on the risks of insect consumption, but this opinion is expected in 2015 at the earliest. Another question is whether insects should be considered Novel Foods covered by EC Regulation 258/97. According to this Regulation, Novel Foods require pre-market approval in the EU (Do you want to read more about Novel Foods? Check this, this and this post). At this moment the European Commission has not explicitly decided on whether insects should be considered Novel Foods or not. Until a clear position and a harmonization of the novel food status of insects at European level have been adopted, some Member States decide to apply their own ‘rules’ for  the placing on the market of insects intended for human consumption.

In Belgium the placing on the market of the species included in the table below is tolerated, provided that the requirements of food legislation are met, especially and among others the application of good hygiene practices, traceability, compulsory notification, labelling and organisation of a self-checking system based on the HACCP principles. This tolerance does not apply to food ingredients isolated from insects, such as protein isolates. 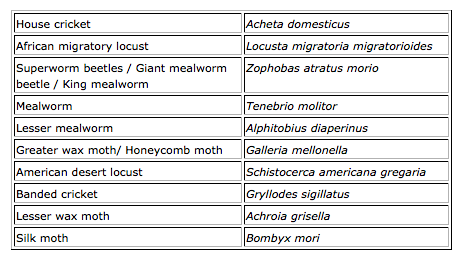 Also France and the United Kingdom seem to tolerate the sale of edible insects in their countries. If you have any additional information from your country or region to include in this post, you are cordially invited to share this with us through info@axonlawyers.com.

On 15 October 2014 the Dutch Office for Risk Assessment & Research (in Dutch ‘Bureau Risicobeoordeling & onderzoeksprogrammering‘, herinafter: ‘BuRO’) published their advisory report to the Inspector-General of the Netherlands Food and Consumer Product Safety Authority (in Dutch: ‘NVWA’) and the Dutch Ministers of Health Welfare and Sport and Agriculture. According to this report the following insects are currently produced and sold in the Netherlands.

The NVWA asked to assess the chemical, microbiological and parasitological risks of consuming heat-treated and non-heat-treated insects. The risk assessment was limited to the three species mentioned in table 1 above. BuRO recommends the Ministers to treat those insects as foods in the meaning of the General Food Law (Regulation 178/2002) that are required to comply with the hygiene regulations (Regulations 852/2004 and 853/2004) and all other food-related legislation. Those insects are not treated as Novel Foods in the Netherlands.

With regards to food safety, BuRO recommends the NVWA to use the following minimum requirements for rearing facilities:

– B. cereus, C. perfringens, S. aureus and Campylobacter spp: criteria stated in the Decree on Preparation of Foodstuffs.

In the Netherlands, the Laboratory of Entomology from Wageningen University is involved in research on edible insects. Scientists Arnold van Huis and Marcel Dicke and cooking instructor Henk van Gurp even published a cookbook: the Insect Cookbook. Click here, here and here for video’s from these scientists on eating insects. More and more supermarkets in the Netherlands sell edible insects. Online it is possible to order various kinds of edible insects from around the world, which are not included in the lists above. NVWA does not seem to focus on enforcement in this area as long as food safety is not at stake.

A slaughterhouse for insects?

Novel Food or not, despite the lack of (legal) guidance and certainty regarding the regulatory status of insects on EU level, it is clear that the attitude towards the use of insects for food and feed is positive.  Therefore, some Member States take action to allow the marketing of insects as food in their country until a clear position has been reached at European level. When EFSA publishes their report and the European Commission takes its position regarding the use of insects for food and feed, you will read it here or get informed through Twitter: @FoodHealthLegal.