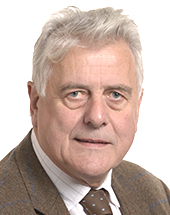 In one of our previous blog posts this year, we provided a summary of the Commission’s proposal for a new Regulation on Novel Foods. We reported that the proposal contained an open product definition and that it introduced a central authorisation procedure. We also pointed out that the new Regulation provided for a simplified authorisation procedure for traditional foods and for a data protection regime. Meanwhile, the European Parliament appointed James Nicholson as a Rapporteur. Mr. Nicholson consulted with local producers, industry experts and food business operators about the Commission’s proposal. As a result, a draft EP legislative Resolution is available, which is the subject of this blogpost.

The EP Rapporteur is a 69 years old Irish citizen, who belongs to the European Conservatives and Reformists Group. He shares his opinions on Novel Foods in the movie entitled Novel Foods: lucrative innovation or health hazard? Although it may seem ironic that a seasoned politician from a conservative party is heavily involved in the subject of Novel Foods, he did deliver a substantial job in less than a year. Can we qualify his suggestions for amendments of the Commission’s proposal as substantial enough? That’s questionable – let’s have a look.

Mr. Nicholson indicates in his draft report of 6 October 2014 that he sees 3 area’s of concern in the Commission’s proposal, being:

(1)  the definition of Novel Foods;

(2)  the streamlining of the authorization process;

Below, these concerns as well as their potential solution will be discussed.

The basic product definition of Novel Foods, notably a food product / ingredient that has not been used for human consumption to a significant degree prior to 1997 within the EU, has not changed. However, the important difference in the new NF proposal is the removal of clearly defined categories of what constitutes a Novel Food. The categories listed in the Commission’s proposal are only examples and not an exhaustive list. After extensive consultation, the Rapporteur found that this open product definition is not satisfactory. It lacks legal certainty and fails to clarify the scope and definition of a Novel Food. As a solution, the Rapporteur suggests re-introducing the previous product categories in an updated form and to add a new product category related to foods for which a new source of starting material has been used. In this way, the new Novel Foods Regulation should be future-proof.

The current authorisation process has been criticised for being too expensive and too lengthy. Processing a successful Novel Foods application takes in the average about three years (!) This of course did not stimulate food innovation and in particularly prevented SME’s from filing NF applications. It probably also explains why between 2000- 2013, only 70 NF applications have been authorized. Therefore, the move to a centralized authorization process can be welcomed. Making NF applications directly at a Commission level instead of at a national level first will most likely save time. The Rapporteur was concerned however that the Commssion’s proposals do not go far enough in reducing the time factor. He has therefore made amendments consisting of stating deadlines where there were not and shorting deadlines as initially proposed by the Commission. For instance, where the Commission proposal provides that an authorisation decision should be published within 9 months after a positive EFSA opinion, the Rapporteur considers such term could be shortened to 6 months.

The proposal for the new NF Regulation moves from a personal to a generic authorisation system. This mechanism is aligned to the health claims system, according to which authorized claims can be used by anyone, provided that the conditions of use are met. However, applicants for NF authorisations usually make substantial investments. Under a system of generic authorisations, it is all the more important that those investments are protected, at least for a minimum period of time. The Commission therefore introduced protection for newly developed scientific evidence during a period of five years from the authorization date of the NF application. Although the Rapporteur welcomes this concept, the is concerned that it will restrict the useful contribution of scientific research to the food industry. He therefore proposes that once the conditions for data protection are met, such protection should also be granted if the data at stake are published in a scientific journal.

Amongst the measures proposed for the area’s of concern, the one relating to the NF product definition certainly is the best. One can argue about the exact phrasing of the proposed product categories, but taking leave of the open product definition provides the required clarity for entrepreneurs whether or not their product qualifies as a Novel Food. If this is an open end at the beginning of the authorization process, why would one even bother to start it? As for the suggestions made to further streamline the authorization process, these can be considered merely symbolic. Instead of shortening a deadline here and introducing another one there, the most important issue has not been addressed. Under the new NF proposal, the Commission shall take into account the view of the Member States regarding NF applications it received “where applicable”. The text seems to suggest that this will not be a standard procedure, but this is not clear. One can imagine that at this point, this may easily absorb a lot of time. Also, no fixed time frames for Member States to comment the NF application has been set. Finally, the system of data protection seems promising, but experience regarding a similar system contained in the Health Claim Regulation has shown that its effect is limited. If third parties for instance produce the same data as the protected data based on independent research, nothing will prevent them from using those data. Taking this into account, it is completely unclear how data protection can be enforced regarding data that have been published in scientific reviews, as suggested by the Rapporteur.

Should this all be considered as “too little, too late”? No – that would be a sombre conclusion. Provided that the suggestions of the Rapporteur regarding the NF product definition are followed and some more substantial reductions in time in the authorization procedure are achieved, the new proposal is a real improvement. This will all the more be the case, once a corpus of generic authorizations will have been published. In that case, manufacturers and importers of Novel Foods will no longer have to undergo an authorization process at all regarding authorized products. But that will be some dishes away from the present menu.

For some background information on Novel Foods and practical examples, reference is made to the Slides “Novel Foods, sexy or burdensome products“, used for a presenation at the Food Valley Expo on 23 October 2014.