Use of nutrition claims in horticultural business 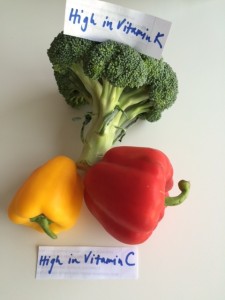 The use of nutrition and health claims is gaining wider application in the food industry. At the same time companies in the horticultural sector focus their marketing more and more at end users of their products. On the basis of this development, the Dutch Kenniscentrum Plantenstoffen (knowledge institute for plant compounds) initiated an investigation whether and how the vegetable chain can benefit from the use of nutrition claims. This information is relevant for breeders, growers, retailers, processors and consumers of vegetables.

The so-called claim legislation (EC Regulation1924/2006 and EC Regulation 116/2010) is applicable to all food and distinguishes between nutrition and health claims. These and the central concept of foodstuff have been defined as follows.

Importance of claims for the horticultural sector: targeted breeding and communication

The Kenniscentrum Plantenstoffen chose to focus its investigation of the importance of nutrition claims for the horticultural sector. The use of health claims generally requires further research and evidence than is required for the use of nutrition claims. The importance of claims for the horticultural sector is twofold. Not only offer claims the opportunity to provide detailed information about specific nutrients in a product. Also the possibility of the use of a nutrition claim can offer an incentive for product improvement. When it is known which claims are relevant in connection with which vegetables and what conditions must be satisfied, is it possible to adjust the marketing and / or the breeding activiteis accordingly. For this purpose two documents were produced.

Based on the current state of the law, there are a total of 29 permitted nutrition claims, including, for example, “low fat” or “sugar free“. A breeding company will however not directly benefit from these examples. Therefore, a selection of claims has been made that potentially offers added value to the marketing of vegetable breeders, growers or other horticultural companies. On this basis, 13 potential valuable claims remained. For all these claims, the terms of use were specified and also the vegetables for the marketing of which they could be used. An example of such selected claim reads as follows.

A special group of nutrition claims are the claims that read “source of [name of vitamin / mineral]” and “rich in [name of vitamin / mineral]”, which may be used solely in conjunction with permitted vitamins and minerals. The applicable legislation (currently EC Directive 90/496 and as per December 13, 2014 EC Regulation 1169/2011) identifies 27 permitted vitamins and minerals. 16 of them have been identified as potentially interesting in connection with plants and flowers. Subsequently, it has been established which claim can be used in connection with which vegetable, both per 100g and per portion. An example is as follows.

Despite the care applied to the selection of crops included in the list of nutrition claims, this selection is of course not set in stone. The reason is that the amount of nutrients (such as vitamins and minerals) is dependent on the specific cultivar per crop. Furthermore, growing conditions such as sun, soil, water and temperature affects the amount of nutrients present in crops. Finally, in the literature consulted regarding nutrients (including vitamins and minerals) intra-and intercontinental differences were found in the same crops. In addition, differences may exist within the same crop per portion: the weight of one tomato does not necessarily equal any other tomato.

Despite the above qualifications, the lists of authorized nutrion claims and vitamins & minerals can be considered as a good indication for which nutrition claims could be used in combination with which vegetable. These lists will be published shortly at this website and they can serve as a new perspective for the Dutch horticultural sector for their marketing and communication of their crops. With respect to vitamins and minerals are also a large number of health claims is available. The Kenniscentrum Plantenstoffen will look into this in the near future.

Health and nutrition claims targeted at food and medical products

For further information on the use of health claims targeted at different products, reference is made to our previous post on this blog. The slides of our seminar on medical and functional foods can be found here.