Dairy under attack … and strikes back!

Posted: January 26, 2022 | Author: Karin Verzijden | Filed under: Advertising, Authors, Food |Comments Off on Dairy under attack … and strikes back! 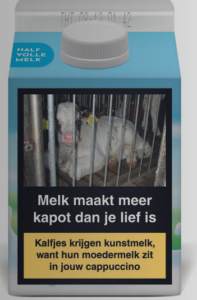 How to strike the right balance between freedom of speech and preventing unfair advertising targeting the dairy industry? This is the object of a Q4 2021 decision of the Appeal Board of the Dutch Advertising Code Committee, consisting of an advertising campaign on bus shelters in the Netherlands and a website campaign. If you are interested to know how broad the scope of “advertising” is and how a rather aggressive campaign was evaluated, continue reading. This post will be limited to the bus shelter campaign only since that already demonstrates the operation of the applicable legal framework.

The bus shelter campaign showed several very explicit pictures demonstrating the misery life of young calves. Under the title “Do you need help quitting?” information was provided on the consequences of the dairy industry for these calves. The text on the various posters in the bus shelters stated the question “Do you need help quitting?”, followed by the following texts:

The wording used above appeals to two well-known anti-smoking and anti-alcohol campaigns in the Netherlands, notably “quit smoking” and “alcohol destroys more than you like (your marriage for example).” The driver behind the anti-diary campaign is the Dutch organisation Animal & Law (“Dier & Recht”) that claims to be voice of the animals. This campaign was opposed by the Dutch dairy organization DairyNL (“ZuivelNL”), that aims to strengthen the Dutch dairy chain in a way that respects the environment and society. DairyNL considered this campaign misleading and therefore unfair.

Scope of the Dutch Advertising Code

The Netherlands knows a system of a self-regulation for advertising, embodied in the Dutch Advertising Code. Companies and other organisations can choose to submit to this system and the outcome (so-called recommendations) of cases based on complaints by whoever considers an advertisement misleading has a high degree of compliance (97 % in 2020). Animal & Law argued that their campaign was out of scope, as it did not envisage selling any products or services. Instead, it alleged to be a non-profit organisation that by public campaigns aims to improve the (legal) position of animals. Alternatively, it argued that if their campaign was captured by the scope of the Dutch Advertising Code, it would benefit from the principle of freedom of expression, as protected by the European Convention on Human Rights. Animal & Law overlooked however that the Dutch Advertising Code also captures ideas that are systematically recommended by an advertiser. The anti-dairy campaign by Animal & Law was found to meet this test. The Advertising Code Committee (“Reclame Code Commissie”) subsequently assessed for each bus shelter poster whether the information constituted misleading advertising.

The test applied is as follows: Advertising is unfair if it contravenes with standards of professional conduct and if it substantially disrupts or may disrupt the economic behaviour of the average consumer. One could consider this is exactly what Animal & Law was after and for a good cause. Under the Dutch Advertising Code however, aggressive advertising is at any rate considered unfair. Furthermore, all advertising containing incorrect or ambiguous information regarding specific aspects of the product at stake is considered misleading, if such information entices or may entice the average consumer to take a transaction decision (including refraining therefrom) that such consumer otherwise would not have made.

Just below the text “Do you need help quitting?” a milk carton is shown depicting a young calf being led away in a wheelbarrow followed by the text “Dairy causes serious animal suffering. Calves are taken away from their mothers immediately after birth.” All of this is depicted within a black framework, just like the health warning on a box of cigarettes. DairyNL argued, amongst other things, that according to the Netherlands Nutrition Centre, the consumption of dairy fits into a healthy diet, whereas the reference to quitting creates the impression dairy is very bad for human health. During the hearing, Animal & Law acknowledged that it is incorrect to state in general that dairy is not healthy. The Advertising Code Committee therefore considered the information re the quitting provided on poster 1 to be ambiguous and thus misleading. This results in unfair advertising.

This poster shows the same setting as poster 1, namely a milk carton depicting an earmarked calf surrounded by a black framework. According to DairyNL, in this context the text “Dairy is deadly. On a yearly basis, 1.5 million calves are slaughtered for dairy” can only be understood as a health warning. Furthermore, the absolute claim on the number of slaughtered calves creates the impression that this slaughter can only be attributed to the dairy industry, whereas it also serves meat production. Animal & Law had responded that calves are merely a by-product of dairy. It had used the warning that “dairy is deadly” to awaken the conscience of consumer. Obviously, the consumer understands the calf is going to die, not the consumer. The Advertising Code Committee considered this warning to be misleading, for the same reason as mentioned above. This part of the advertising was therefore considered unfair. The complaint regarding the slaughter was strikingly not addressed. I deduce therefrom that at any rate it was not concurred with.

On this poster, a calf is shown behind the bars of its small cage. DairyNL argued the setting of this poster (identical as described above) and the text “Milk destroys more than you like” links milk to two health hazard products, i.e. cigarettes and alcohol. DairyNL also argued that the claim “Calves are being fed artificial milk because the cow’s milk ended up in your cappuccino” creates the impression calves only drink artificial milk. Animal & Law refuted this complaint by explaining the claim does not state that calves only drink artificial milk. Animal & Law did not deny calves are being fed colostrum right after birth. However, this only takes 2 days, whereas the natural weaning period of calves amounts to 6 – 12 months. Here the Advertising Code Committee did not consider DairyNL’s  claim founded, as DairyNL did not dispute that after a few days, the calves are being fed artificial milk instead of cow’s milk.

So what is the result of all this and what can we learn from this advertising decision? If the campaign of Animal & Law was mainly after shock and awe, it certainly succeeded. The pictures of the calves shown in the context of health warnings for cigarettes did not miss their effect. Potentially, a number of consumers became aware of certain facts it did not realise before. But will these consumers say a definite no to dairy? That’s the question, as the campaign may also have a counterproductive effect. Personally, I expect the chances of a seductive dairy alternative much higher for inducing consumers to eat no more (or just less) dairy. The learning from this decision is that even if the freedom of expression is a major public good, it also has its limits. No purpose justifies providing incorrect or ambiguous information. This learning applies equally to those outlining the pro’s of dairy alternatives, but certainly also to those emphasizing the con’s of dairy.